Camping is often seen as in the woods, with a tent, campfire, and s’mores.  However, it’s not always that.  Sometimes,  it’s something unique, such as camping in the rocks at Eleven Mile State Park.

Eleven Mile State Park is located in Colorado Springs, Colorado, and offers a variety of activities that are made even better by the fact that it’s set in between the Rocky Mountains.  The scenery is beautiful, and can be enjoyed while boating, hiking, biking, and camping.  Here’s our rundown of the state park.

Eleven Mile State Park is the perfect place for camping.   The state park has 5 campgrounds spread around the lake, and the majority of the sites are no hook-up.  The only electrical sites are found in the Rocky Ridge campground, and they’re around $7 more per night than the non-electric.  There are a total of 385 sites throughout the state park.

The sites are a decent size considering they’re spread among the rocks, but most wouldn’t fit anything over 25-30 feet.  We found 1 site that we could fit our 33-foot motorhome in, and it was a tight squeeze.  Most of the sites are ideal for pop-ups and tents.

Though there’s no water hookups at each site, there are a few taps scattered around each campground and at the entrance, where you can fill your water tanks before you set up camp.  There is also a dump station at the exit, so you don’t have to drive up and down the mountains with full tanks. 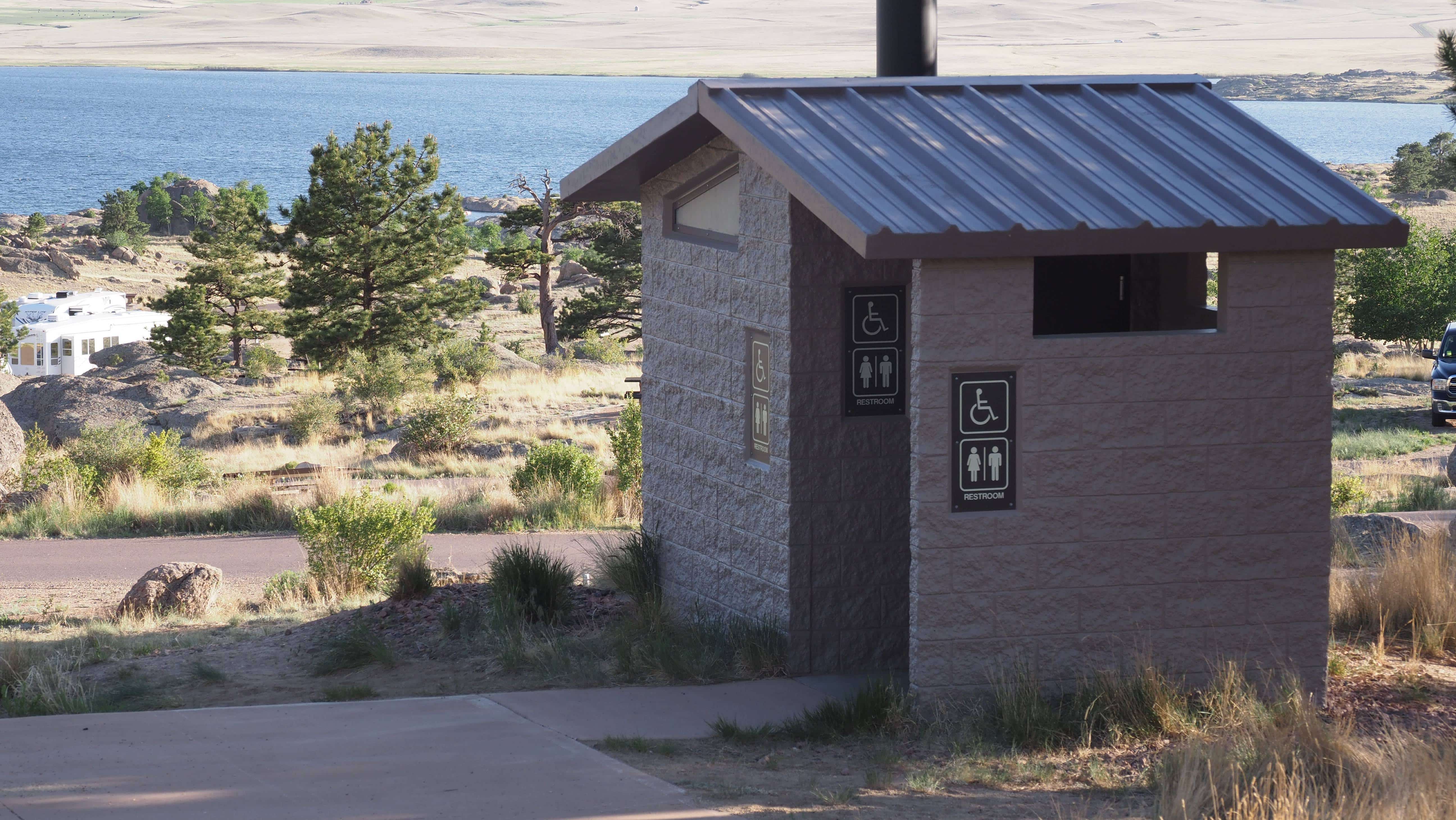 The bathhouses were clean, but without running water

As for the bathrooms, the campgrounds near the entrance have vault toilet bathrooms scattered around the sites.  The bathrooms have no running water, but there is a centralized bathhouse with showers and running water.  The only true downside to this is that you have to pay to take a shower.  The fee is 25 cents for 1 minute, so it’s not too bad if you can take quick showers.  Later that month, we went to Chatfield State Park, right outside of Denver, where we found they also charge for the showers.

Overall, the amenities are pretty good for a State Park located 30 miles from the nearest town, which is also in the middle of nowhere.  The only thing that could be better is having vault toilets for the campgrounds on the opposite side of the lake, as there are none currently.

The sites at Eleven Mile State Park are between $15 and $25 per night.  The electrical sites are on the higher end, and the no hookup sites are cheaper.  The prices are pretty decent, but there’s a hidden fee.  We’ve discovered, after staying in 3 different CO state parks, that they charge for the campground per night, but also for each vehicle per night.  This means that each vehicle, including a motorhome, is going to be an extra cost.  We ended up paying an extra $14 per night. For us that added up to $32 per night, which is pretty expensive for no hookups.

The pricing is pretty fair, just be warned that it will be around $10 more per night than you originally thought.  This can be worth it in some places, but some state parks don’t have the amenities for it to be worth paying $30+ per night to stay there.

Eleven Mile State Park is also a great place to just enjoy the lake.  Kayak rentals are available, and you can also bring your own boats.  We enjoyed biking the roads in the state park, however out of breath we got.  We also drove around the lake one night, and we came across several llamas, cows, donkeys and horses roaming on the roads.  They belonged to nearby farms that let them free range, so that was a really neat experience. 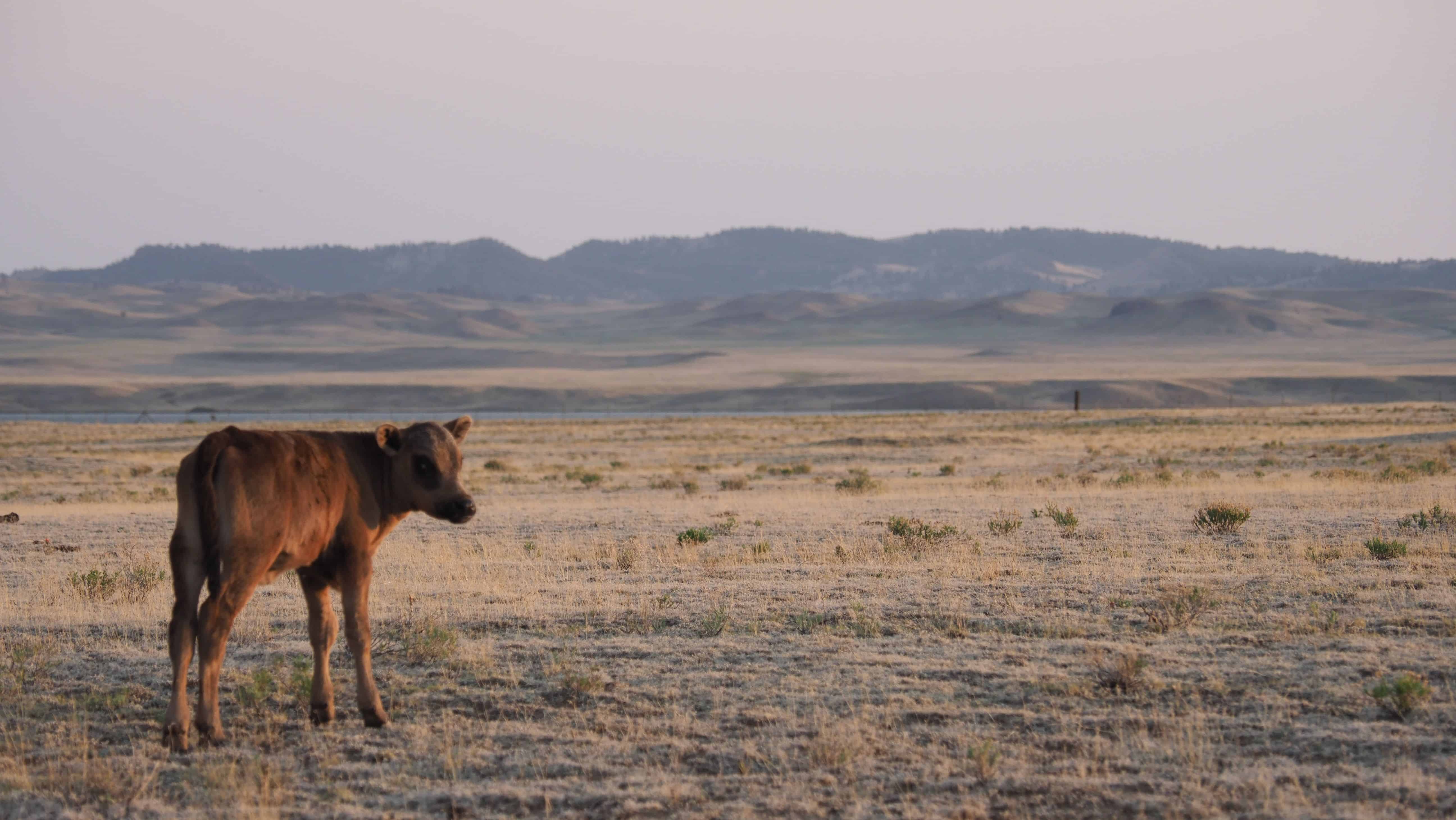 There were cows and animals all over the fields

Typically a review of a state park would include a section about the surrounding activities, but in the case of Eleven Mile State Park, there aren’t many.  The state park is located well away from civilization, and the nearest town is around 30 miles and 1 hour of driving away.  You’ll just have to settle with enjoying the scenery of the lake and the mountains.  Oh, and did we mention the rocks?

One of the highlights of our stay in Eleven Mile State Park was the rocks.  Rocks and boulders surround the campsites, so there’s plenty of privacy, and lots of fun for kids.  Plus, you get more separation between you and your neighbors. Overall, a win-win!

For a state park, it has incredibly nice sites, located in between the Rockies and the foothills of the Rockies.  The views are spectacular, and it’s a great place to slow down and relax.  The only downside is the price, due to the extra day pass vehicle fee that they make you pay.  It comes out to around $35 a night, which isn’t terrible for the experience that you get.   Overall, 5 stars for location, 3 for price, and 4 for amenities.