Full-time RVing is a great opportunity to unplug and connect with nature, and it’s a unique experience.  The chance to be out in nature, and explore everything the country has to offer.  However, sometimes there’s a little too much ‘unplugging’ and not enough connecting.  The good news is, RV internet isn’t hard to get.

-Which should you get?

Getting internet while RVing isn’t as difficult as you thought.  There are tons of people out there RVing who post on YouTube, blog, and keep up with the times.  After so many people have done this, there are plenty of ways to stay connected while full-time RVing.  This article will go over some of the easiest and most popular options for getting RV Internet.

There are multiple ways to get internet in your RV, and they all vary.  Some are more expensive, some have better coverage, and others are faster than the rest.  Each option is best-suited to different types of people, so pick the option which best suites you.

One of the best ways to get internet while RVing is through cell service.  There are multiple carriers, and each one covers different locations.  This if by far the most mobile-friendly option, and we highly recommend it. If you have two phones, we suggest getting a different carrier for each one.  That way, if one cuts out, the other one might still have service.   We have T-mobile and Verizon, and we’ve only been in one place that neither of them got reception.  Usually, one of them will always have at least some coverage.

We’ve depended on our cell service for uploading videos to our YouTube channel, sending e-mails to friends, and publishing blog posts. 🙂  We’ve only ever been to one place without internet, so cell service is one of the more reliable options, as most big carriers cover 90% or more of the US.   Here’s a comparison of the 4 major nationwide carriers and their coverage. 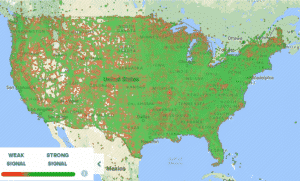 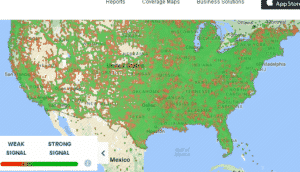 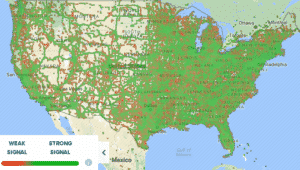 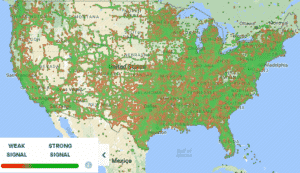 -Verizon is the most well-known carrier and has the most coverage nationwide.  They’ve got more coverage in the mid-west than other carriers, and better coverage overall.  However, according to RV Mobile Internet, their popular plans are grandfathered, meaning they’re only available to those who are already customers of that plan.

-T-Mobile has less coverage than AT&T and Verizon, but they’ve got higher speeds than the other carriers.  The coverage is great in populated areas, and they a good choice for someone who wants fast internet.

T-Mobile also allows roll-overs on data, meaning whatever you don’t use in that month gets carried over to the next month.  Verizon and Sprint both don’t do this.  T-Mobile also allows for unlimited mobile hot-spot use, making it a great choice for RVers who have computers and tablets that need internet.

-AT&T is the second-largest carrier, and covers a vast majority of the country.  It’s LTE speed aren’t as high, but they are ideal for people who need good coverage.  AT&T is a great option to combine with Verizon for maximum coverage throughout the country.

AT&T also allows roll-overs on data, which is a great option if you sometimes don’t use all of your data.

-Sprint is a ‘nationwide’ carrier, but they mainly provide service along interstates and in cities.  Much of the country in the central and western parts is in the dark as far as internet from Sprint goes.  However, Sprint is a good option for anyone who doesn’t move around too much away from the cities.

Overall, cellular service is a great option for anyone who doesn’t go too far off the beaten path, and needs fast internet.

People who need to be connected in most locations, and need high speed internet. Of course, the speed and coverage vary by provider, but it’s almost always faster and more reliable than free WiFi at small stores.

Free WiFi is popular among, well, everyone.  Because it’s WiFi, and it’s free.  That’s why RVers can hit up free WiFi spots in the area to check E-Mail, call someone, or keep up-to-date on the news.  Here’s where you can find free WiFi.

Campgrounds are a great place to get free internet.  However, it’s only available if you’re staying there, as there’s a password for the connection.  If you need WiFi at your campground, you can make reservations for one that has WiFi.  The campground websites usually say if they have WiFi or not, so you don’t have to look far.

If the campground you’re at doesn’t have WiFi, another option is to drive into the local town and look for small stores that have.  If they have WiFi, their network will pop up in your list of available networks as you drive by.  Once you find one, you can go in and ask for the password.  Keep in mind, some stores might only have the WiFi for customers, meaning you might have to purchase something from their store before they give you the password.  If you don’t want to spend anything, you can keep looking around the town.

If you can’t find any small stores with WiFi, you can usually find a chain restaurant that offers WiFi.  These can include McDonalds, Starbucks, and Panera Bread.  For a full list of stores offering nationwide free WiFi, click here.

Although many stores offer free WiFi, Starbucks was the fastest at over 9 GBPS of download. This is faster than the average person’s phone, which is great for RVers.

If you don’t need WiFi often, and only use it to check e-Mail and to stay in touch, than looking for free WiFi is a great option.  Most often, it’s slow, but it’s sufficient for checking mail and keeping in touch.

If you thoroughly enjoy being out in the boondocks without a soul in sight, than the above options might not work.  If you’ve got no cell signal and there are no stores within around an hour, satellite internet is the way to go.

Satellite internet is the most reliable solution if you’re full-time RVing.  Here’s how it works:

-You do something on your computer

-The information is sent from your satellite dish to the one in space, and than to the Internet Service Providers satellite.  It’s then sent back to space, and back to your computer.

There are some pros to satellite, such as coverage, but there are also some cons.  First off, the price.  While cell service plans are around $80 a month, satellite internet plans can reach $200 bucks a month for an average-speed connection.  This can be cost-prohibitive to most people.

Another downside to satellite internet is the reliability.  While you’re guaranteed connection in  most places, that’s not the case for rain.  If you’re near a storm, or even obstructions, the signal from the satellite in space can’t reach your satellite.


Satellite internet is extremely expensive compared to other options, and it can range from $100-$200 dollars for average 4G speeds.  It’s not ideal for anyone who can use any of the other options.

What you need: WiFi Equipment

Though this can depend on which internet option you pick, there’s recommended gear that you should have for each of those options.  This list should give you a good idea of what you need and how much it will cost for each option.

Cell service gives you the most bang for your buck, and we recommend it for anyone who needs fast WiFi for a decent price.  Here’s a list of everything that will get you internet while on the road, and what it will cost.

*Note:  All costs are estimated.  The average price was used in cases where an exact price could not be attained.

A data plan is needed with any carrier before you can get internet. The popular carriers are Verizon, AT&T, T-Mobile and Sprint. Each of these have different plans and costs, but the average is around $70-80 dollars.

You need a cell phone to receive internet from a carrier.  Once you get a phone, you’ll be able to share your data using personal hotspot, so you can access the internet on other devices.  If you have a phone already, skip this price.

This is an essential piece of equipment for getting internet if you’re RVing off the beaten path.  Typically, places in the boondocks don’t get a strong cell signal, if any at all.  With a cellular signal booster like the Drive 4GX RV, you can go from slow, less-than-3G coverage to 4G LTE coverage with a few minutes of installation.

Installing the signal booster will give you a 10X boost in your signal.  The company advertises 30X, but our experience is around 10-15X.  That’s not anything to complain about, though.  We’ve had basically no signal, and speeds of around .5 mbps of download.  Once the booster was set up, we got 10 mbps of download, a 1,000% increase.  That’s a lot!!

The signal booster is a must-have for full-time RVers and anyone traveling off the beaten path.

Following months are $70 for the data plan

The overall cost of cellular service isn’t bad, considering that it’s one of the most versatile options.  It’s great for mobile RVers, and it’s the cheaper option when compared to satellite.

Satellite internet is certainly the best option as far as coverage goes, but there’s more equipment and higher costs for it.  Here’s what you’ll need:

A satellite dish is needed in order to receive signals sent from the ISP’s satellite in space.  Without one, you won’t get internet.  Typically, your satellite dish will be installed on top of your home, or near it.

After your satellite dish is installed, you’ll need to run coaxial cables to a modem.  The modem then sends the internet signal to your PCs and laptops.  This can be found for around $100 on amazon.

COST: $100-$200;  sometime included with satellite dish from your provider

You need an internet provider, such as HughesNet or Viasat.  They can cost around $50 bucks for the basic plan, but that might not be sufficient as far as speeds go.

Which should you get?

Okay.  So you know the options, but which one should you pick?

Here’s a rundown of which one is better for which application.

People who need to be connected in most locations, and need high speed internet. Of course, the speed and coverage vary by provider, but it’s almost always faster and more reliable than free WiFi at small stores.

If you don’t need WiFi often, and only use it to check e-Mail and to stay in touch, than looking for free WiFi is a great option. Most often, it’s slow, but it’s sufficient for checking mail and keeping in touch.


Satellite internet is extremely expensive compared to other options, and it can range from $100-$200 dollars for average 4G speeds. It’s not ideal for anyone who can use any of the other options.

Hopefully, you’ve been able to make a choice on which internet option is best for you.  Remember, get out there and explore the country in your RV!

What internet options do you use?  Tell us which one and why in the comments!